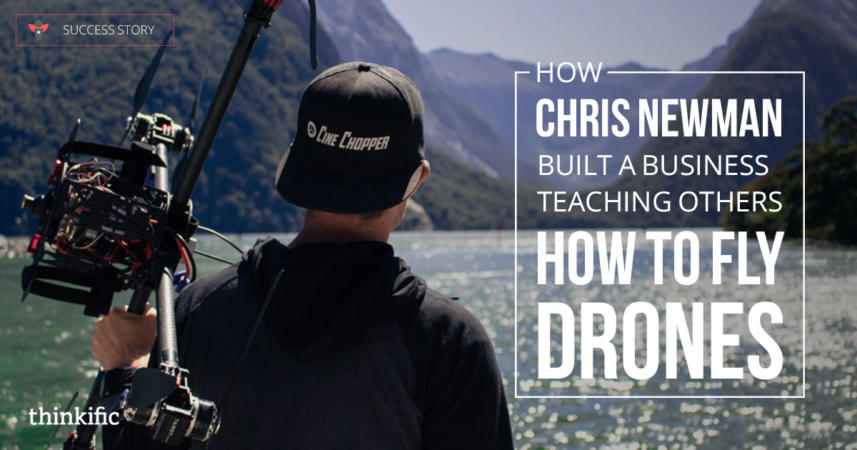 Chris Newman is a professional drone pilot who specializes in remote controlled aerial videography and photography. Basically, he spends his time traveling to cool places around the world to fly drones and record amazing videos for his clients. It’s a pretty sweet gig.

With over seven years of experience in film and cinematography under his belt and a strong passion for what he does, Chris has become one of the best drone pilots in the industry. He has a remarkable ability to capture amazing, dynamic and cinematic shots in virtually any setting.

So it comes as no surprise that his rolodex of clients include companies like Subaru, Ford, Mazda, Mountain Dew, Monster Energy, and more. He’s also worked with filmmakers such as Robert Duvall, and even YouTube stars such as Devin Super Tramp. Oh, and he also designs and maintains his own helicopters. Very cool.

In addition to being a successful drone pilot, Chris is also doing very well as an online instructor. He has a popular YouTube channel where he publishes drone flying videos, and he’s the creator of a premium online course, CineChopper University, which has attracted hundreds of students from around the world eager to learn from his experience.

We caught up with Chris to learn more about his journey as a drone pilot and online instructor, and also to snag a few pieces of advice to pass on to other online course creators.

As is the case with most of the online instructors we’ve spoken to, the decision to create an online course was sparked by the constant influx of questions he was receiving from his audience. As Chris published more drone flying videos his YouTube channel, many of his viewers would ask questions in the comment section of the videos, and in some cases by reaching out to him directly.

Eventually, it got to a point where Chris was receiving a lot of the same technical questions each day. That’s when he realized that it would be more efficient for him to create an online course that he could refer people to, instead of continuing to answer the same questions on a daily basis. And thanks to his YouTube channel, he already had a highly targeted audience that he could start promoting his course to. But instead of simply creating a course and then hoping they would buy it, he decided to validate the demand for his course first.

In April 2014, Chris published a short video on his YouTube channel to announce that he was going to create a course about drone flying. Basically, he asked anyone who was interested in learning from him to email him their questions. Not only did the questions he received help him create an outline for his course, they also helped him build an email list of people who specifically told him that they were interested in taking his course once it was created.

Here is the video he published, so you can see for yourself what he said:

When Chris created his online course, he used his WordPress website with an e-learning theme to host it. With his course up and running, he started running ads and hosting webinars to promote his course. One time, after spending about $1,500 on ads, he drove so much traffic to his course website that it crashed. When the same thing happened a second time, he knew he needed to find a better system to host his course.

As Chris researched different platforms for hosting his course, he had some specific criteria in mind. Firstly, he wanted a platform that could handle large amounts of traffic in short periods of time. This would ensure that whenever he ran ads or hosted a webinar to sell his course, his sales page wouldn’t crash when a large number of people visited the page at the same time.

It was also important for Chris to have complete control and flexibility when it came to pricing his course. He wanted to be able to create discount codes for his course so that he could offer a special price for certain people (such as people who attend his webinars, for example). He also wanted to give his students the option to pay for his course in a series of monthly payments rather than pay the full price upfront.

Because he sells his course for a premium, Chris also didn’t want to have to pay any transaction fees on his course sales (those fees can add up quickly if you’re selling several courses per month!). He opted for our Business Plan, where in exchange for a fixed monthly fee, he keeps all the revenue from his course sales.

Chris’ course contains a lot of different video lessons, so it was also important for him to be able to upload multiple videos at the same time, rather than uploading them one by one. When he was using his WordPress website to host his course, he had to manually upload each video one by one, which took several hours to complete. That was time he could have been spent marketing his course, creating more content, or serving his clients. Thanks to our Bulk Upload feature, Chris was able to upload all of his course content in just a few minutes.

Selling his course from live webinars

Chris has tried several different strategies to market his course, but the one strategy that has been the most effective for him has been hosting webinars.

Chris uses WebinarJam to host his webinars, and then he uses Facebook and Instagram Ads to promote them. He was using image ads at first, but then he switched to video ads and started seeing much better results. Nearly all of the people who click on his video ads end up registering for his webinar, and of those people, about 30% will show up for the live presentation (this is a pretty typical show-up rate for live webinars across all industries).

A typical webinar presentation consists of Chris sharing some of his best drone flying tips upfront, followed by presenting his course to the attendees. To encourage people to buy his course right away, he includes special bonuses that he doesn’t offer anywhere else except on his webinar. Sometimes he gives away an $80 drone for free, sometimes he offers a discount on his course, and sometimes he enters everyone who attends his webinar into a contest where the prize is a $1,000 drone.

Thanks to these incentives, Chris will typically enroll 15-20 new students into his course every time he hosts a webinar. His best performing webinar was one where a wasp was flying around in his room and he spent 5 minutes freaking out and trying to kill it before returning to his presentation. At the end of that webinar, he enrolled 30 new students into his course. Perhaps they wanted to repay him for the hysterical entertainment he unintentionally provided.

Since Chris has been doing a great job of selling his course using webinars, we asked him to share his best tips. Not counting trying to kill a wasp in front of your attendees (hey, whatever works right?), here are his suggestions:

1. Host a live webinar with a Q&A session at the end

If you’re deciding between hosting a live webinar and running ads to a pre-recorded one, host a live one instead. The benefit of a live webinar is you get to engage with your attendees throughout the webinar and at the end. After you present your course, spend at least 10-15 minutes answering any questions people want to ask before they decide to buy from you.

2. Include freebies and bonuses to increase engagement

3. Finish with a strong call to action to buy your course

Many online course creators love to teach, but they hate selling. Most webinar presentations consist of educating your audience up front and then transitioning into a sales presentation for your course. That transition is where a lot of online instructors get uncomfortable and shy away from asking for the sale. Practice presenting your course with confidence and finishing with a strong call to action to visit your course sales page and buy your course. If you know you have a great course, don’t hesitate to encourage others to take it.

Tips for other online instructors:

To wrap up our conversation with Chris, we asked him to share a couple more tips to help other online instructors succeed. Here’s what he told us:

One of the keys to Chris’ success as an online instructor has been his commitment to creating really great content for his audience and his students. And he doesn’t just create content that he thinks they will enjoy. He asks them what they want to learn from him, and creates training videos based on responses.

Creating really great content has another important benefit as well. Great content helps you to justify charging a higher price for your course. When Chris created the first version of his course, he sold it for $200. Since then, he has continuously improved his course and added more content to it. Today, his course sells for $1,497. “If you deliver high value to your students and you’re always supportive, you can charge more”, says Chris.

2. Tap into the power of webinars

Out of all of the different marketing channels that online instructors can tap into to sell their course, Chris suggests using webinars. If you’ve never hosted a webinar before, there will be a learning curve. “Your first few webinars probably won’t do so well”, says Chris. “The key is to keep learning and keep optimizing. I make changes to my webinars almost every week. I’m always improving them.” 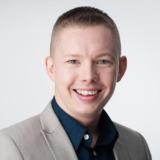 As the Content Marketing Manager at Thinkific (2016-2019), Tyler Basu helped to create, publish, and promote content to help thousands of entrepreneurs learn how to create and sell online courses. Today, he works directly with entrepreneurs to help them create content that attracts and converts their ideal clients. 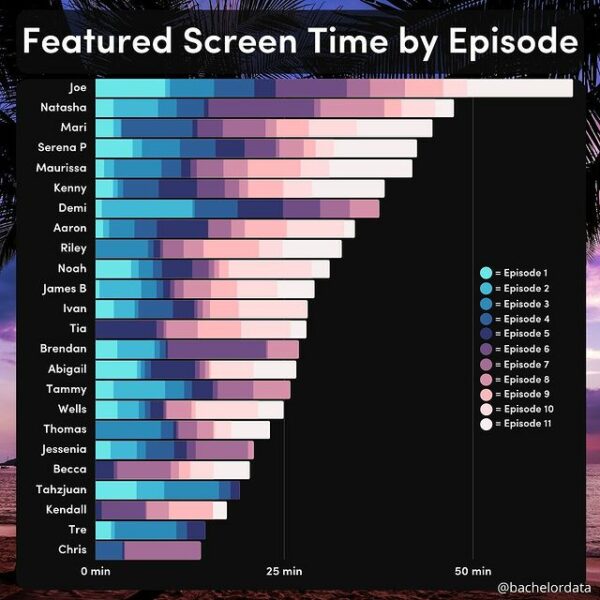 How this Self-Taught Data Analyst Created a Thriving Business — Without Overth...

How Suzana Somers grew her audience, the process of turning her passion into a business, and how having the right mindset can lead to success in any niche. 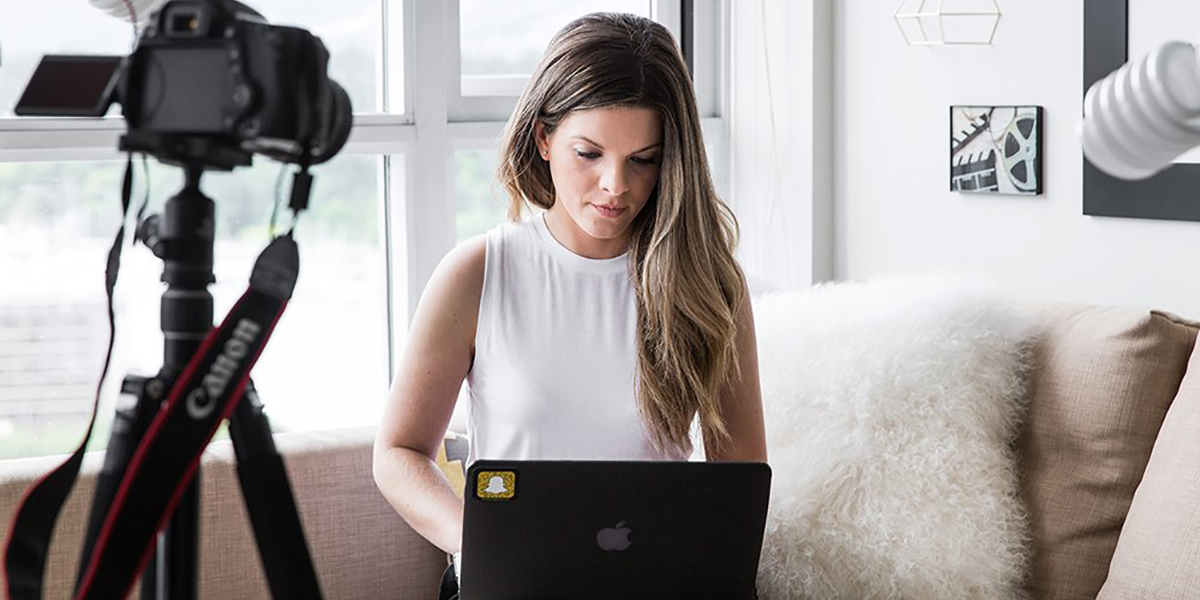 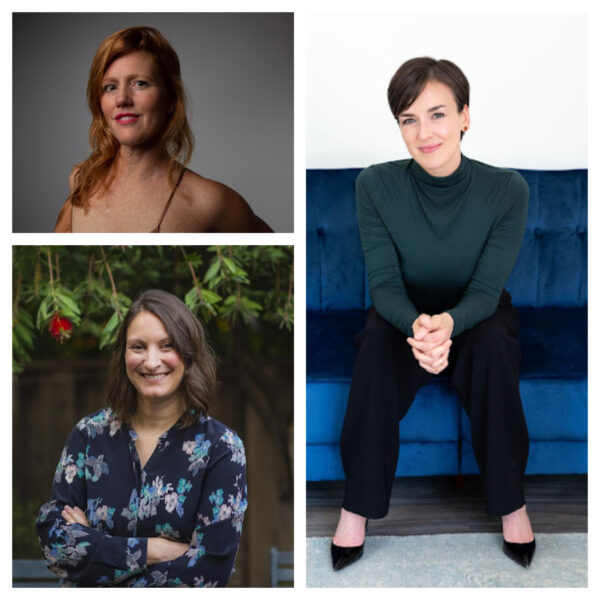